and the launch of the Sarvavidya Dance Ensemble

Venue:  The Fringe at Joburg Theatre

Samyoga, a Sanskrit word meaning the conjunction of two or more heavenly bodies, is the merging of the divine masculine and feminine known in Hinduism as Shiva Shakti. This dual existence, as understood through Hindu philosophy is what governs the universe. This philosophy states that male and female energies reside within every being; that one aspect cannot exist without the other; and are balanced by their innate dual nature.

An illustration of this duality is the manifestation of Shiva in the form of Ardhanareshwara, in which he and the goddess take on the form of an androgynous being that is half male and half female: Shiva, the male, is consciousness, while Shakti, the female, is primordial energy. For Shiva to become kinetic consciousness, he must be empowered by Shakti. Without Shakti, Shiva’s consciousness is dormant, but when awakened by his Shakti, the universe that is the construct of Shiva’s thoughts is able to become manifest as a constructed reality (Ashley-Farrand 2003).

This production is a portrayal of the merging of these complementary forces in an attempt to portray the magnificence and inevitability of this divine coupling of masculine and feminine. The goddess is shown to manifest as both the graceful, nurturing mother (Lalitha Tripurasundari) yet also exist as the ferocious, destructress (Kali). Shiva appears as the magnificent Nataraja (Lord of Dance) who is the ultimate dancer and is also shown as the fiery challenger to his female counterpart as he dances the Oordhva Tandava.

Join us for a blissful union with the divine through dance as we take you on a journey that connects you with both he and she, light and dark, the physical and the transcendent.

For further information please email This email address is being protected from spambots. You need JavaScript enabled to view it. or call Panna – 082 491 4376 Tickets available at Joburg Theatre or Webtickets or call 0861 670 670 or Theatre Box Office 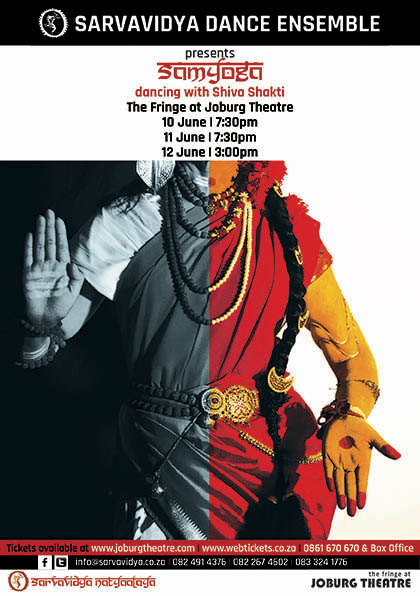